When you hear the term “Italy,” what comes to mind? The first thing that comes to mind is spaghetti, a flavorful, spicy, and enticing dish. It’s also really quick and simple to prepare.
we suggests trying these ten appetizing Italian pasta recipes that will take almost no time to cook at all. 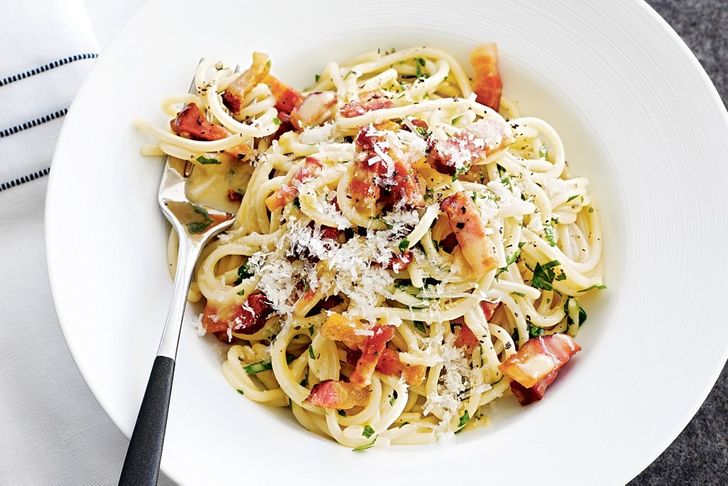 1-In a skillet, heat the olive oil. Garlic should be chopped and fried with the oil. Chop the ham finely. Cook for 3 minutes with the ham in the skillet.
2-Whip the cream and egg yolks together. Toss in the Parmesan and season with salt and pepper to taste.
3-Bring the pasta to a boil until it is al dente. Drain the water and combine the spaghetti and ham in a large mixing bowl. Pour in the sauce and cook for 7 to 8 minutes, or until the sauce thickens. 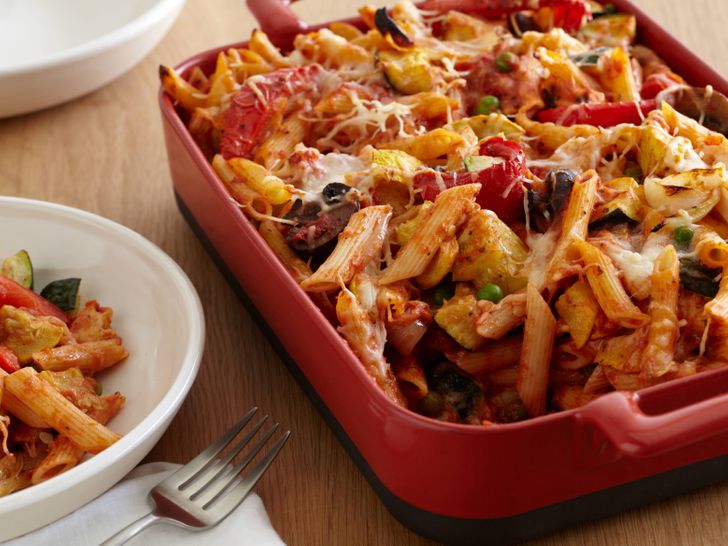 1- Preheat the oven to 230 degrees Celsius. The pepper should be cut into stripes, and the onion should be cut into half-moons. Zucchini and marrows should be cut into cubes. On a baking tray, arrange the pepper, zucchini, marrows, onion, and mushrooms. Combine the olive oil and the rest of the ingredients in a mixing bowl.
2- Bake for 15 minutes, until tender, with 1/2 teaspoon salt, 1/2 teaspoon pepper, and herbs.
3- Bring the penne to a boil for 6 minutes, or until it is al dente. Drain all of the water In a large

5- Place the penne in an oil-greased baking mold. Add the Parmesan cheese and the butter cubes to the dish. Bake until the cheese has completely melted and the pasta has developed a golden crust. 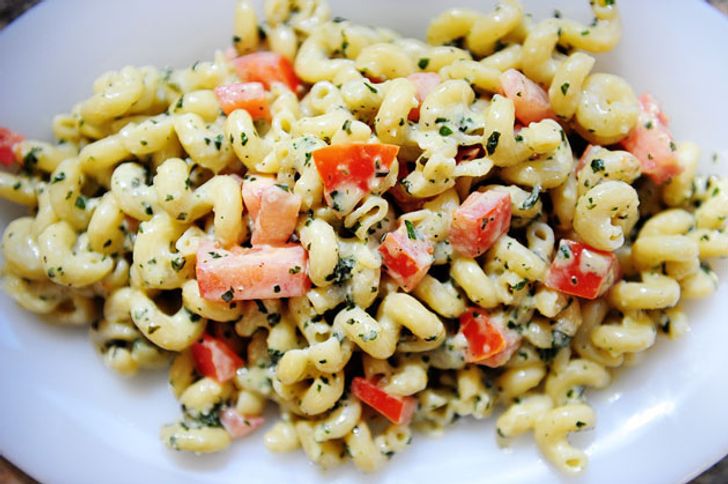 1- Blend the basil, garlic, cedar nuts, and parmesan in a blender to produce pesto. Season with salt and pepper to taste. Pour the olive oil in slowly and carefully. Combine all of the ingredients well.

2- In a small saucepan, heat the cream over medium heat. In a small bowl, melt the butter in the cream. Then add the pesto and completely combine the sauce.

3- In a pot of salted water, cook the pasta. Drain all of the water. In a large mixing basin, combine the paste with the sauce and toss everything well. If desired, add chopped tomatoes. 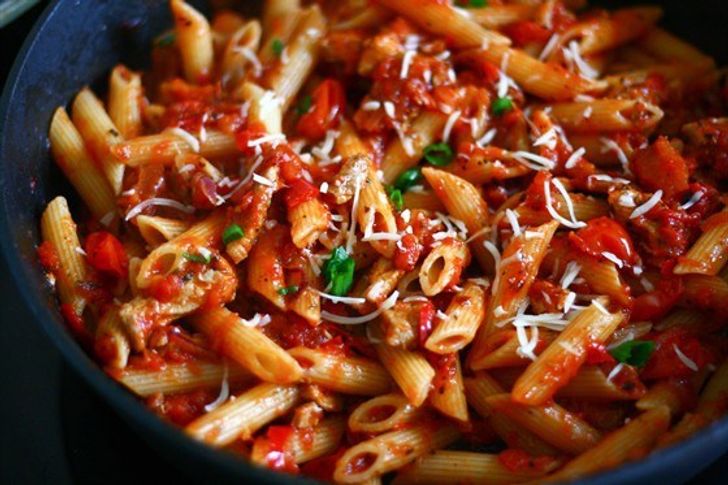 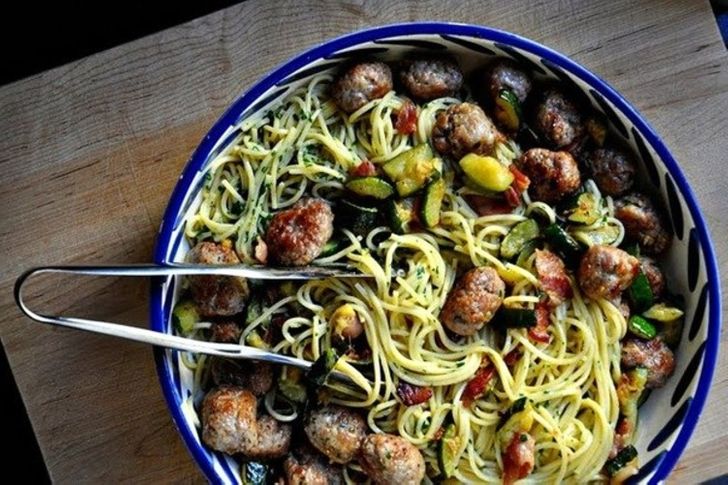 1- Toss the mince, onion, and spices together and season to taste. Small meat balls should be made.

2- Melt the butter in a pan over medium heat. Cook the meat balls for 5 to 6 minutes in a hot skillet. Toss in the bacon strips and sliced zucchini. Cook for 3 to 4 minutes, stirring occasionally.

3- Boil the pasta in salted water for a few minutes. Parsley should be chopped and the lemon should be zested. To prepare the sauce, whisk together the egg yolks, zest, parsley, and Parmesan in a mixing bowl.

4- Toss the spaghetti with the sauce and serve beside the meatballs. Combine all of the ingredients in a large mixing bowl and season to taste with any spices you choose.

Pasta with shrimp and tomato-wine sauce 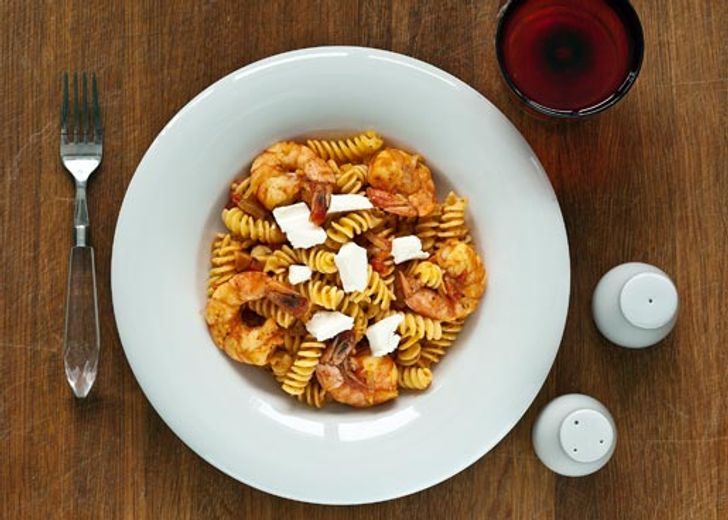 1- In a pan, heat 1 teaspoon of oil. Cook for 2 minutes after adding the garlic. Then add the wine and tomatoes and cook for 30 minutes, stirring occasionally. When the sauce is finished, season with salt and pepper to taste.

2- In a pot of salted water, cook the pasta. Drain the water and toss the pasta with the butter once it’s done.

3- Fry the shrimp in the remaining oil before adding the sauce.

4- Combine the pasta and sauce in a serving bowl and serve immediately. 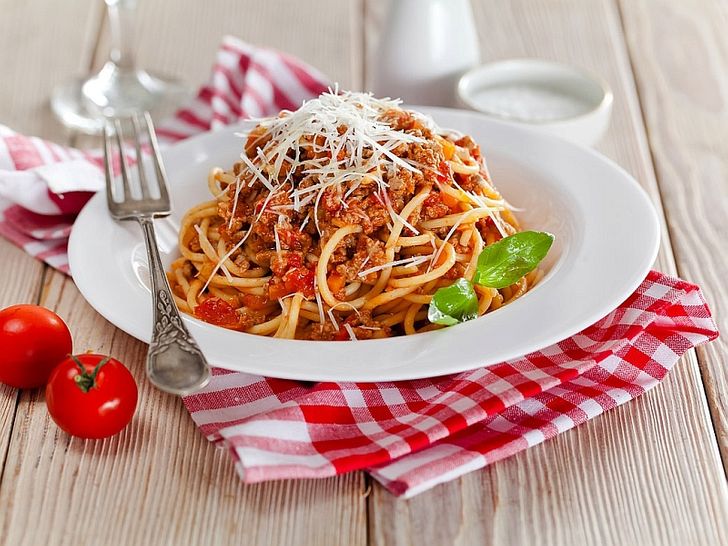 1- Cut the onion, celery stalk, and carrot into cubes and cook them till tender in olive oil. First, fry the onion, then add the celery a minute later, and the carrot two minutes later.

2- Cook the mince until it becomes brown in its own juice. Almost all of the juice should have evaporated by this point.

3- Cook the spaghetti according to the package directions in salted water. Cook for 40 to 60 minutes after adding the veggies and canned tomatoes to the meat. After that, add the garlic. 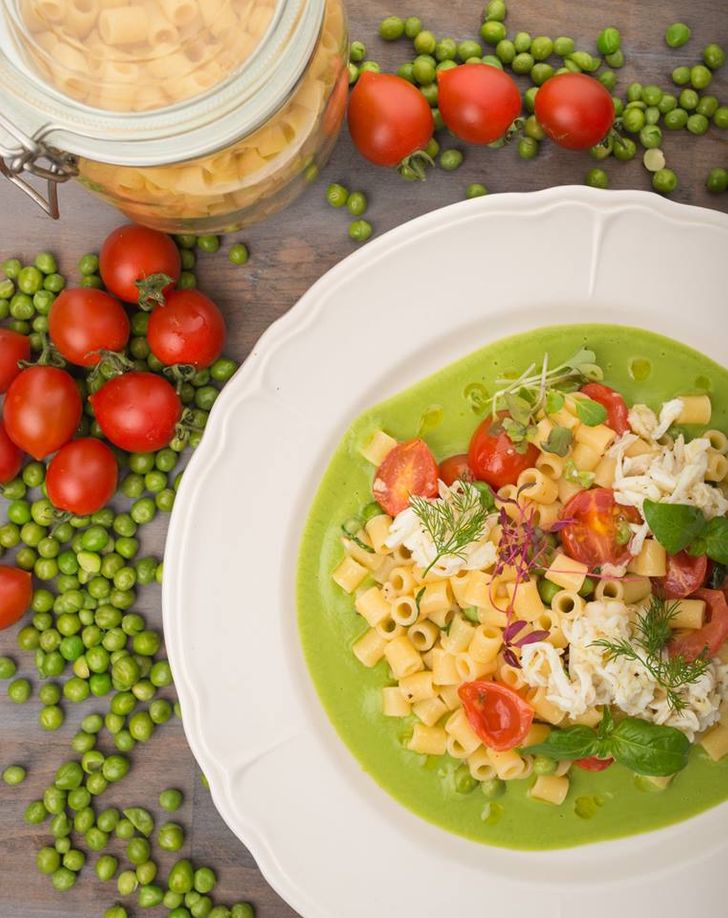 1- In a pan, heat 20 g olive oil and add the onion and bacon. When they begin to turn golden, add 200 g of peas and continue to fry for a few minutes. To prepare a puree, combine all of the ingredients in a blender.

2- Cook the pasta according to the package instructions.

3- In a pan, heat 20 g olive oil, then add the remaining peas and simmer for 1 minute. Then toss in the noodles and toss everything together rapidly.

4- Pour the sauce into a large mixing basin, toss in the pasta, and top with crab meat, cherry tomatoes, and grated Parmesan cheese. Pour in the olive oil and, if wanted, the chopped chili pepper.

Spaghetti with broccoli and red wine 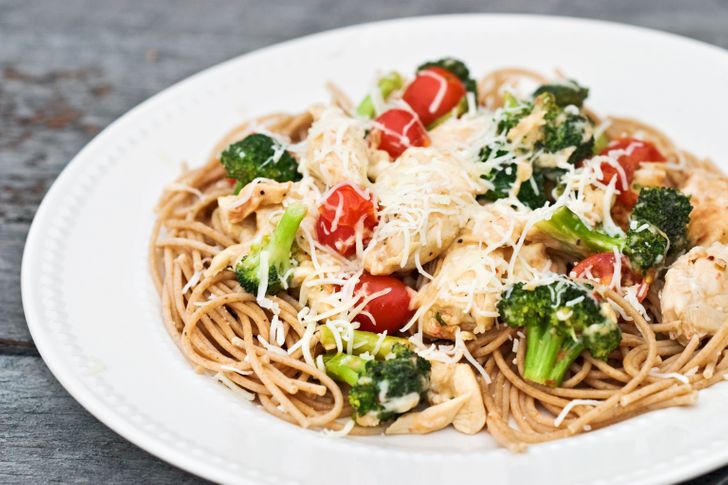 2- Bring a pot of water to a boil with the broccoli and cook the spaghetti for 5 minutes, stirring occasionally. The water should then be drained.

3- In a big saucepan, combine the wine and sugar and bring to a boil for 2 minutes. Cook the spaghetti for 6 minutes, or until most of the wine has evaporated. It’s best if the pasta is al dente.

4- Heat up the olive oil in a skillet. Add the chopped garlic and chili pepper flakes. Fry until the garlic turns golden. Then add the broccoli, salt and black pepper and cook everything, stirring, for one minute.

5- Add the spaghetti in the skillet and cook until all the wine evaporates. Turn off the stove, add the cheese, and serve hot. 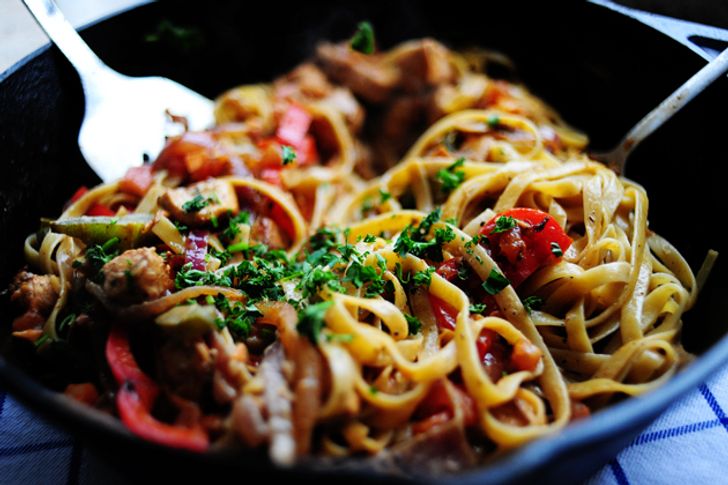