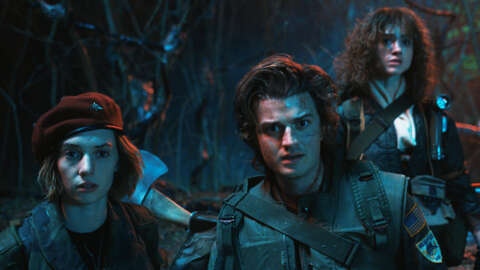 On July 1, Volume 2 of Stranger Things Season 4 was released. While it was only two episodes long, it clocked in at four hours, with the finale coming in at nearly two and a half hours. A lot happened towards the end, and it may be a bit tough to piece together everything that happened. Don’t worry, we’re here to explain it all.

Warning: Spoilers for the end of Season 4 of Stranger Things below.

While Volume 1 wrapped up with an expositional drop about who Vecna ​​is and was, the season finale explains a little bit more about the character and the creation of the Upside Down to what we know it as today.

Vecna ​​in the Upside Down

When Eleven feels Vecna ​​to the Upside Down, it wasn’t the place we know it is now. It was a parallel world, with floating islands, and yes, the Demogorgons were there, but no one was controlling them. Vecna ​​explained he became an explorer of this realm, and what changed everything for him was finding a way to become the “predator [he] was always meant to be.” This meant learning to control the Mind Flayer. He explains that it was always him behind the monsters.

However, while these monsters always existed in the Upside Down, Vecna ​​knew they were there–as he drew pictures of them as a child. He just needed someone to open up the door to let him in–and that person was Eleven. Vecna ​​found a way to open his own doors though.

Vecna ​​explains this all to Eleven, also telling her that there’s no way to stop it. Vecna ​​plans on burning Hawkins and the world to the ground, and reshaping the world to something “beautiful” as he puts it.

Eleven fights back with her powers inside Vecna’s mind, where all of this exposition has been happening. Inside the Upside Down, Nancy, Steve, and Robin light Vecna ​​on fire with a couple of molotov cocktails, and Robin blasts him with a shotgun. However, he’s already killed Max, and Eddie dies due to rocking out to Metallica too hard and being killed by Upside Down bats.

They’ve apparently won. Vecna ​​is dead, but he had already taken Max, so four people have died, completing his mission. After this happened, Hawkins experienced an “earthquake” all across the town, with the four portals to the Upside Down extending into town, at a crossroads, destroying much of the town.

The media is calling the event an earthquake and people are leaving the town in droves. As for Max, she isn’t dead. She’s in a coma in the hospital. Apparently, her heart stopped for over a minute and clinically died, but she came back to life. Again, still in a coma. Eleven attempts to use her powers to find her, but can’t find Max.

Eleven, Mike, Jonathan, and company arrive in the pizza truck back in Hawkins and everyone is reunited. They head out to Hopper’s old cabin, just outside of town, to hide Eleven. Hopper and Joyce eventually make their way to the cabin as well.

And the episode ends with Will being the first to notice something is very, very wrong. Across Hawkins, there is a colliding of two universes, and the bizarre dust from the Upside Down is now appearing in Hawkins. Smoke and lightning is appearing above the portals downtown. And the season ends with everyone staring at the town.

Vecna’s plan to reshape the world in his image has already begun. Hawkins is very quickly becoming the Upside Down. It’s obvious that Will still has some sort of connection to it–more than anyone else with him. It feels like the right direction to have him be some sort of key to helping undo this merger between the two worlds considering he’s been connected to the Upside Down–one way or another–from the start of the series.

As for everyone else that’s still in Hawkins, what are they doing there? Haven’t they seen the orange glowing light emanating from the middle of town and the red lighting and plumes of black smoke? Because there are a lot of people left.

Obviously, it’s going to take the Stranger Things together to stop this once and for all–and they may need Max along for the ride. But what about Vecna? He seems dead, but what if he transferred his consciousness into Max in order to return to our world, and that’s why Eleven couldn’t find her? Vecna ​​said during his final moments that he’s already won, and what if that didn’t mean the merging or worlds as much as it meant that he’s now Max?

Season 5 will end the series, but we’re obviously still a long way off from that. So for now, all we can do is theorize.